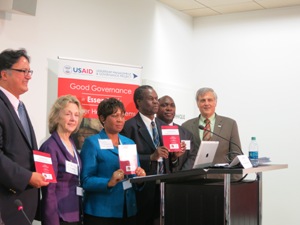 Prof. Francis Omaswa center during the launch of the ministers handbook-GenevaThat a healthy nation is a wealthy nation is not up for debate any more. That is why there are many well-intentioned programs aimed at improving health and access to health services the world over.

However, as recipients of health services such as mothers, children and the elderly as well services providers like the doctors and nurses are always at the fore-front of many campaigns, the people who govern and manage the country’s health systems - the ministers - are usually forgotten.
But on May 22, 2014 the ministers of health were the focus. A book titled, “Handbook for Health Ministers” was launched in Geneva, Switzerland by Dr. Pinkie Rosemary Manamolela, the Lesotho kingdom health minister.