Lord Nigel Crisp Prof.Francis Omaswa Hon. Prime Minister Ruhakana Rugunda Hon. Cryspus Kiyonga & Hon. Elioda TumuwesigeA week after he took over office, the Prime Minister, Dr. Ruhakana Rugunda, has promised to aggressively reduce maternal mortality in the country as a top priority during his tenure as Leader of Government Business.
“I want to see health conditions of the people of Uganda improve, especially those of mothers and children. They are dying because of performing their natural duties. I have no doubt that we have no choice but to take this matter seriously,” he said.
Speaking at the launch of a book, “African Health Leaders: Making Change and Claiming the future, at Sheraton Hotel Kampala, Rugunda said the linkage between societal governance and health promotion that is underscored in the book, will be the guiding principle in his quest to improve the health conditions in the country during his tenure. 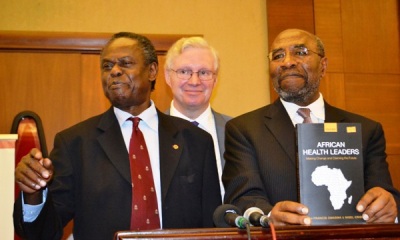 The book narrates life-changing health milestones that have been engineered by Africans in the field of medicine and urges leaders and other actors to start thinking of developing Africa by coming up with home-made solutions for the continent’s problems. In his remarks, Prof. Francis Omaswa, the executive director of the African Centre for Global Health and Social Transformation, urged African “techno-professionals” to come out and show leadership in various sectors so that the continent can jump out of the chain of carrying a bowl to donors.

“This is one group of Africans who have tremendous potential to act as locomotives to pull Africa out of beggarhood and be a better and equal player at home and at global level. We, techno-professionals know so much, but as I argue in the book, we have let our people down,” Omaswa said.Also speaking at the launch, Dr. Crispus Kiyonga, the minister for defense, described Omaswa as a friend who helped him set up health centre facilities (mini-hospitals) in the country and also nominated him for the position of chairman Global fund during his (Kiyonga) tenure as health minister.The state minister for health, Dr. Elioda Tumwesigye asked Omaswa to help the government make a model on how to achieve universal health care for Ugandans.Copyright: New Vision, October 13, 2014