The African Center for Global Health and Social Transformation (ACHEST) is one of the 200 organizations around the world that are featured in this year’s Global Health 50/50 report.
The report titled “Power, Privilege and Priorities’ reviews gender-related policies and practices of organisations that aim to promote health and/or influence global health policy.
Now in its third year, the report publishes a Gender and Health Index across four dimensions:
1) Commitments to equity
(2) Presence of workplace gender equality and diversity policies
(3) Gender and geography of global health leadership, and
(4) Whether gender is addressed in health policies and programmes.

Commenting on the findings of the report, the Executive Director of ACHEST, Prof. Francis Omaswa says: “Gender responsiveness within institutions is essential for enabling all human resources to perform to their maximum potential for the overall good of the organizations and for holistic societal wellbeing. ACHEST adopted and embraced a Gender Policy which is a cornerstone of our routine work.”

Overall, the Global Health50/50 report finds evidence of a growing commitment to issues of equality and of organisations’ ability to make meaningful and rapid change. 75% of the 200 organisations assessed make some form of documented commitment to equity, social justice, human rights and/or health for all. 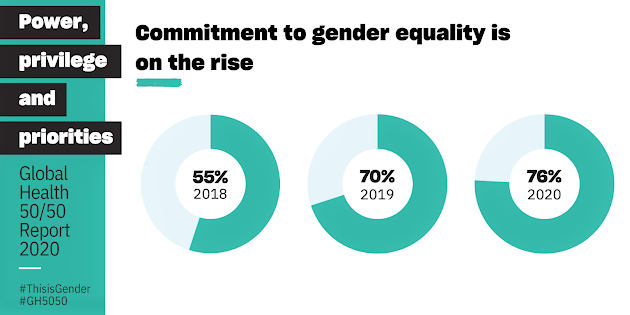 Commitment to Gender on the Rise
“Our analysis shows those organisations that define gender are also more likely to also be committed to addressing the underlying gendered determinants of ill-health i.e. tackling the inequalities in power and privilege that are associated with an increased risk of illness or lack of access to care,” the report says.
However, it notes that while there is a growing commitment to gender equality, the meaning of gender remains undefined by the majority of organizations under review.
It further indicates that that there is a mismatch between global attention and the burden of disease. Some health-related SDG targets get more attention than others, and some with high disease burdens seem particularly neglected (e.g. NCDs and environmental health)

“The global health sector is stuck in the MDG era and is failing, for example, to adequately address the rising burden of Non Communicable Diseases,” says the report.
“Maternal and child mortality and infectious diseases continue to receive the most attention, issues which were predominant in the era of the Millennium Development Goals (MDGs; 2000-2015). The SDG targets for 2030, particularly NCDs, are not receiving proportional attention from funders or other organizations. This is despite the fact that NCDs cause the most premature deaths globally,” the report  summary adds.

Taking a gender lens to the SDG targets will not only promote more equitable outcomes, but is likely to result in more effective policies and programmes that deliver better health for everyone across all health-related targets, the report stresses.
“Global health organizations wield power at both global and national levels. Priorities set by these organizations about which health issues and which populations should be targeted have an impact on who benefits and which conditions receive adequate attention,” it says.