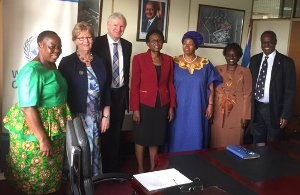 Nursing Now Board meets Health Minister Dr. Jane Ruth Aceng Nursing Now Regional Board meeting in Kampala on February 3-4, 2020
Nursing Now is global campaign that seeks to improve health globally by raising the status and profile of the nurses and midwives.
Launched in 2018, the campaign has over 528 Nursing Now groups in over 112 countries, actively working to influence policy and to empower nurses and midwives to take their place in tackling the 21ST century health challenges.
The African Regional Meeting in Kampala was attended by the Co-chairs of the Nursing Now Campaign Global Board Lord Nigel Crisp and Professor Sheila Tlou. Other Board members were Professor Annette Kennedy, President of the International Council of Nurses, Munashe Nyika from Zimbabwe who represents young Nurses and midwives on the Board and Professor Francis Omaswa who was host to the Board meeting. The meeting also attracted Nursing and Midwives’ leaders from Kenya, Malawi, Rwanda, Uganda and Zambia who gave first-hand insights into the challenges they face that often leave them feeling undervalued.
During group discussions, it was noted that the problems go beyond limited political support and health budgets to lack of personal attributes such as lack of self-confidence, communication and public speaking skills.

Nursing Now Board meets the Prime Minister Rt Hon Dr. Ruhakana Rugunda
The meeting strongly urged nurses and midwives to confront the challenges and organize themselves into professional associations which would help advance their careers.
Prof. Francis Omaswa, particularly encouraged the various Ugandan nurses groups to form a federation that incorporates all the current sub-specialized associations.
He stressed that such an alliance would promote professionalism, service standards, quality of the training, mentorship and succession issues among others.
Currently, there is only a Nurses and Midwives Union in Uganda, which is basically advocates for labour rights.

“Ugandan nurses should organize themselves into a powerful association which will ensure that the standard of services to the population is as high as it can be; and that the quality of training and education is as good as it can be; and be able to bring together nurses and midwives so that they can be able to learn from each other. Once that happens, everything else will follow,” said Prof. Omaswa, who is also the Executive Director of African Center for Global Health and Social Transformation (ACHEST.)

Group picture of the participants and student nurses from Nsambya Hospital
Prof. Annette Kennedy, the President of the International Council of Nurses concurred that nurses and midwives are the biggest cadre of health workers. “And they do 90% of the job. We have to work together,” said Prof. Kennedy.
Dr. Diana Atwine, the Permanent Secretary in the Ministry of Health regretted that nurses “have allowed their voice to be silenced under the table.”
“Nurses must be involved. Have the voice of reason. Have a strategic plan. Doctors cannot decide for you. You are a big force. No one can ignore you,” Dr. Atwine said, and added:
Lord Nigel Crisp, the Nursing Now Co-Chair said: ‘You as nurses, be confident in making things better.” Professor Sheila Tlou summarized the objectives of the global Nursing Now Campaign and described how the leadership of Nurses and Midwives was promoted in Botswana where she served as Health Minister.
The meeting also discussed professional development and leadership interventions that were needed to have the nurses have their place in the attainment of the Universal Health Coverage.
Also discussed was the need for specialized nursing; the nursing representation in the various decision making positions; and updating country policies to allow adoption of highly qualified nurses. The meeting further called on governments and health employers to invest in nurses and midwives, in order to achieve health for all.
During the meeting, representatives of the Nursing Now groups from Kenya, Malawi, Rwanda, Uganda, Zambia and Zimbawe and Malawi offered lessons for other countries to learn from. They explained how they are the Nursing Now Campaign as an opportunity to bridge the gap between generations within the profession, in the form of the Nightingale Challenge.
The Nursing Now Board also held discussions with Uganda’s Prime Minister Rt. Hon. Dr. Ruhakana Rugunda and Minister of Health, Hon. Dr. Jane Ruth Aceng.
The Nightingale Challenge asks every health employer around the world to provide leadership and development training for a group of their young nurses and midwives during the Year 2020. This is in celebration of the 200th birth anniversary of Florence Nightingale, a nurse, innovator, reformer and leader of improved health care. In this regard, 2020 has been declared by the World Health Organization as the Year of the Nurse and Midwife.
The highlight of the two-day meeting was the Nursing Now anthem which was unveiled by the student nurses from St Francis Nsambya Hospital in Kampala.
********
Compiled by Carol Natukunda, Communications Specialist, ACHEST