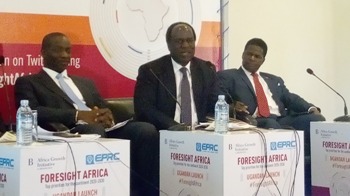 topLower fertility rates, coupled with reduced mortality and investing in human capital development, will enable African countries to achieve the demographic dividend.
This was emphasized by Dr. David Okello, the Director of Non Communicable Diseases and Health Ageing at the African Center for Global Health and Social Transformation(ACHEST), as he participated on the panel that discussed the newly launched report: Foresight Africa: Top Priorities for the continent 2020-2030.
Published by the Brookings Institution's Africa Growth Initiative, the report, among other topics, discusses how the Sustainable Development Goals (SDGs) will shape policy priorities for African governments and their partners in the next decade. The report shows that one of the top challenges facing the continent continues to be the mismatch between demographic trends and job creation.
However, Dr. Okello told participants that there is an answer to this dilemma: an empowered population would be productive to the economy.
He gave candid observations on how the high fertility rate in Africa was a burden not just to the economy, but also to a woman’s health.
“We need to reduce our fertility urgently. The population pyramid shows that we are producing too many people. Yet, many are dying before they reach the productive age,” said Dr. Okello.
“In my village, some women are subjected to give birth to up to 10 children! No woman should be drained that far! 10 is a disservice to the woman! A lot of these children don’t grow to become economically active. Having 50 percent of the population below 15 years is an economic burden. You cannot achieve the demographic dividend,” he added. 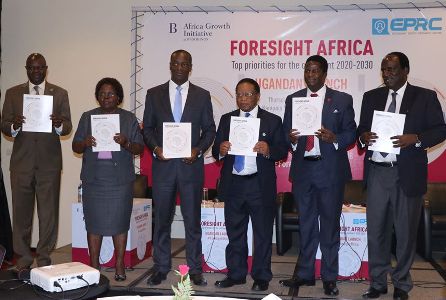 PICTURE OF THE EVENT --OKELLO1 economically active, Dr. Okello noted that it was important for countries to invest in hands-on training.

“This 15-year-old who is still in school; what skills are you giving them? Can we have a balance on what our priorities are? Don’t say, let me first invest in infrastructure and forget about the population. There must be a balance. We are in a catch 22 situation. If we need children, they must grow to be productive citizens. Not everybody must to go to the university to get a degree or a PhD - but they should be helped to acquire some skills,” he stressed further.
Dr. Okello also acknowledged the need for male involvement in a bid to lower the fertility rates. “This is the problem of men and they must be on the table. Sometimes, a man has one wife, but with many kids outside the marriage. We can’t have children we cannot feed,” he said.
According to the World Bank, the population of sub-Sahara Africa has grown from 186 million to 856 million people from 1950-2010. By 2060, the population of sub-Sahara Africa could be as large as 2.7 billion people. Africa remains the region with the highest fertility at about 5 children per woman.
Another panelist Brahima Coulibaly, a Senior Fellow and Director Africa Growth Initiative who said in controlling fertility, girls education must be put into consideration.
Ugandan economist, Dr. Ezra Suruma while delivering his keynote address said; “ We don’t need much argument in agreeing that SDGs are indeed priorities.”
Rosa Malango, the UN Resident Coordinator in Uganda called for cooperation at all levels, if the country’s goals were to be realized.
The function was organized by the Economic Policy Research Center.
Compiled by: Carol Natukunda, Communications Specialist, African Center for Global Health and Social Transformation (ACHEST)