The ACHEST Executive Director, Prof. Francis Omaswa together with the Director Health 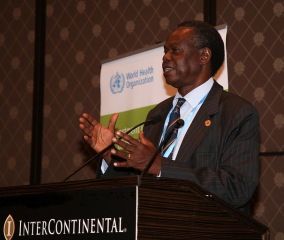 While making a presentation at the WHA, He noted that, “In Africa, much as the HWF densities have not changed in 10 years partly due to rapid population growth, a lot is happening and there has been concrete progress where we now have an African HWF Roadmap adopted by Health Ministers and Heads of State, thirty countries have HWF plans, there are exciting Education Initiatives such as NEPI and MEPI that are now being shared widely in the region and the new leadership at WHO Afro Region is repositioning WHO to be a stronger partner and to the African Platform on HRH, AUC and other key players in the region.

Professor Omaswa also pointed out some challenges and cautioned that; the push for Community Health Workers should not be communicated as if they are the whole solution to HWF crisis in Africa.

CHWs need support from the population as well as from higher professional cadres and those who support African work should focus more on building indigenous institutional capacity. He also called for unity and cohesion among the actors in HWF at global, regional and country level urging better use and strengthening of country and regional mechanisms that already exist.