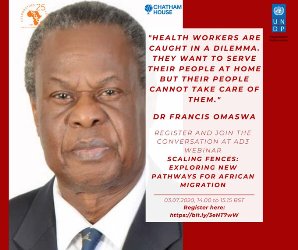 The report titled, ‘Scaling Fences: Voices of Irregular African Migrants to Europe,’ brings out experiences of irregular migrants from Africa, and offers practical suggestions on expanding legal pathways for migrants in line with the 2018 Global Compact for Safe, Orderly and Regular Migration.
Up to 3,069 adult African migrants who had travelled from 43 African countries of origin were interviewed across 13 European countries. They had all arrived in Europe through irregular means at least six months before they were interviewed for this study.

Presenting the findings at a webinar on July 3, 2020 , Dr Jide Okeke, the UNDP Regional Programme Coordinator for Africa, said the research confirms that migrants are taking calculated risks, comparing the potential gains and losses of migration with those of staying in given conditions at home.

“Irregular migration is not without risk. In spite of the risks, only 2 percent of the respondents said they would stay at home if they had previous knowledge of the risks involved,” Dr. Okeke told the webinar organised by UNDP and Africa Foundation for Development (AFFORD).
Irregular migration, for those interviewed in the report, is an investment for a better future. Economic motivations, closely tied to self-actualization, and a sense that aspiration can only be fulfilled through departure from Africa, were fundamental views shared by respondents.

It illustrates that although Africa has made strides, the rate of development is not fast enough, and gains are uneven and limiting. In fact, the research finds that those who travelled were relatively better off than their peers. Family involvement and support in making the risky journey to Europe possible was also found to a key factor, with the belief that migration would help better or diversify the household and family income.
Speaking at the virtual event, the ACHEST Executive Director, Prof. Francis Omaswa put emphasis on the global health workforce crisis of widespread shortages and mal-distribution and which is being escalated by irregular recruitments of health professionals.

IMAGE OF THE WEBINAR

It should be noted that Prof. Omaswa’s most recent blog raises alarm on the clandestine movements of health workers inspired by the rich and powerful countries. The blog COVID - 19 EXPOSES A GLOBAL SCRAMBLE FOR HEALTH WORKERS shows that countries are recruiting health workers without regard to mal-distribution, shortages, ethics and the WHO Code on the International Recruitment of Health Personnel.
Prof. Omaswa explained that implementing the WHO Code would ensure equitable access to a shared global pool of health workers, ensuring that migrant health workers are well taken care of, while at the same time strengthening health systems for both the sending and recipient countries.
He observed that migration was inevitable considering the demographic and economic realities that exist.
“The fact is northern/rich countries have ageing populations. The few young people they have would rather go for investment banking jobs & not health jobs that keep you awake in the middle of the night. Ageing populations also means increased need for social care nurses,” said Prof. Omaswa
He added, “At the same time, we from the southern countries, have many young people. We aren't training enough of them. And those that we train, we are not able to retain them because of the poor working conditions.
And like in the (UNDP) report, the families say ‘you go to Europe, you'll make more money and help all of us."

At this virtual event, speakers called for the need for advocacy to shape public perception of migration as mutually beneficial and necessary in order to help citizens to appreciate migration in a positive way and not fear it as an invasion , in line with the objectives of the Global Compact on Orderly, Safe and Regular Migration.